The Whataboutism at Every Holocaust Memorial Day

Last Monday was Holocaust Memorial Day. Once again the global Jewish community and people of goodwill (and, I might add with a touch of cynicism, politicians) gathered in different locations to retell and remember, reflect and reaffirm that this atrocity should have never happened and we should all ensure that it never happens again.

In cyberspace, Holocaust Memorial Day is a starting point for some people to find space for their soapboxes, and engage in that banal yet enchanting logical fallacy; whataboutism.  They post memes highlighting other examples of human atrocities on a mass scale that have occurred before and after the Holocaust and ask the question; how come all these other ignoble acts of mass slaughter are overshadowed by the Holocaust? This leads us  (rhetorically, at least- I am not prepared to vouch for the logic of it) to ask; is it because the Holocaust involves Jews and the others are not? From there, the argument goes out in all directions. The Holocaust is given more attentions because Jews control the media, so they are going to put their own stuff out there first. The Holocaust is given more attention because western nations feel guilty, and Jews own all the banks. By now, we are cruising on Anti-Semitism Boulevard, but none dare call it such because to question this view is to confirm its basic point; other atrocities throughout human history are not as significant, because they do not involve non-Jews.

Fortunately, such convoluted thinking can be dismantled by challenging its basic premises. The most obvious is the claim that other human atrocities are not being taught in schools etc because they are not seen as important, hence the need to remind us that King Leopold II of Belgium was responsible for 15 million while Hitler of the Third Reich only managed 6 million. I cannot speak about every education system in the world, but I think information on various atrocities is available. I learnt about the Holocaust and King Leopold’s slaughter of Congolese at around the same time, in my teens, when the educators in Zimbabwe deemed I was old enough to handle such matters. However, I was already acquainted with an American television show that I was able to reflect on many years later in a seminar on the very topic of at what age do we start to teach children about such atrocities; V: the Miniseries and its sequel, The Final Battle. They were shown around 1986 in Zimbabwe, when I was ten years old, so it was only later in life that I was able to make the connection with the Holocaust. I learnt about the Transatlantic Slave Trade even earlier, as Huckleberry Finn was the first book my father bought for me. The Rwandan and Serbian Genocide played out as current affairs, and were widely discussed in Zimbabwe at the time.

As a Rastafarian, I knew about the Armenian Genocide before most of my peers because a group of Armenian orphans settled in Ethiopia and were adopted by the Emperor Haile Selassie I and became the Imperial Brass Band. One of these Armenians, Kevork Nalbandian, composed the music for Itiyopia hoy! (Hail, Ethiopia) the national anthem of Ethiopia until 1975. At the Emperor’s Coronation in 1936, the band refused to play the Ottoman Empire’s anthem, but the Emperor and the Ethiopian people allowed it out of sympathy for their feelings.

I could go on and on about each of the atrocities that have occurred before and after the Holocaust, demonstrating a fair knowledge of what happened, who were the victims and so on. The important point is that the notion that many people in the world know only of the Holocaust and nothing about all the other bad things that have happened in recent memory is simply not true.

The other premise is that there are no events to mark these atrocities. I know of events in London marking the memory of the Rwandan Genocide. In the small town of Middlesbrough where I live, we have an annual Breaking The Silence on Congo Week, which draws attention towards a series of atrocities that are currently taking place even as I type this. 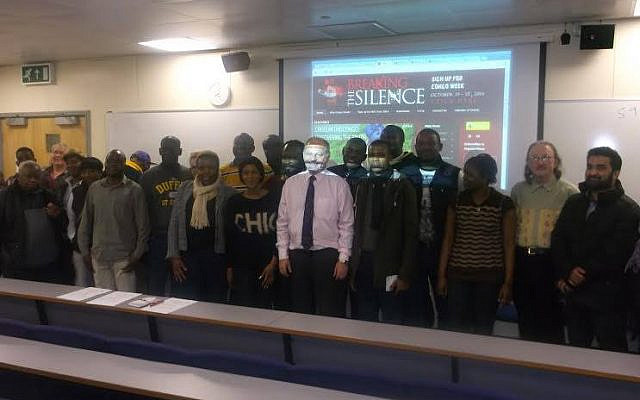 Marking Congo Week at Teesside University, Middlesbrough. I am in the background, just behind the man in the pink shirt, surrounded by refugees and asylum-seekers from the Congo and other African countries, and, I think, three MPs, academics, journalists etc. On this particular occasion, an internationally acclaimed film maker presented a documentary on sexual violence against civilians by the miltary.

This notion that there is no information out there on other atrocities or such information is being suppressed so that only the Holocaust has pride of place is not only untrue, it is blatantly antisemitic in that it repeats the canard that Jewish people, by controlling the media, set the agenda on which international issues are worthy of mention and which are to be relegated to a collective blindspot. The choice of comparing Leopold II to Hitler is deliberate; it suggests that there is a racist dimension to the perceived glossing over of a tragic piece of African history while promoting a Jewish one. Another piece of propaganda aimed specifically at African people and people of African descent. A fence is built around it too; if you challenge it, that can only be because you don’t care about Africans.

At the risk of being accused of reverting to Whataboutism too, I think it needs pointing out that the same people who like to evoke other human rights atrocities do very little to highlight current issues. Take for instance, the crisis that continues in my native Zimbabwe. I have been shown a confidential document presented to the International Criminal Court about atrocities committed by the incumbent regime against citizens by UK-based Zimbabwean journalist Simba Chikanza. In our conversation, he noted ruefully that the ICC was unlikely to act because it was too busy with Israel.

So, while it may appear that some atrocities are not getting any attention, the truth is that this is because a disproportionate amount of attention is directed towards Israel. Countries like Zimbabwe and South Africa have thwarted the same International Criminal Court’s attempt to hold Omar Bashir to account for the massacre of some 2 million Black African Christians and animists in a then united Sudan, but they can be counted to vote against Israel at the United Nations.

As we fight in Israel’s corner on various social media platforms, we must not underestimate the power of whataboutist memes, and challenge them for the lies they spread.

MM is a novelist, screenwriter, essayist, blogger and actor of some note, with work published all over the world and online. He was born and grew up in Zimbabwe, but has lived in the UK since 2002.

ERA and the United Nations